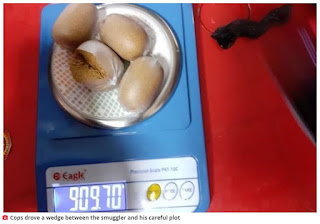 up his bum (mông đít).
Mohammad Sharif was "moving suspiciously" (đáng nghi) when cops at Imphal Airport, southern India decided to give him a check-up.
What they found was less 007, more The Man with the Golden Bum.
After an internal search, Mohammad was allegedly found to have almost a kilo of gold wedged up his backside.
India Times reported he was on his way to New Delhi when his subtle ploy (mánh khóe, thủ đoạn) was rear-ended at the last moment.
...It was then, during the examination (khám xét), that his flaky (dễ bong ra từng mảnh; điên rồ, dị) plan was revealed (phát giác).
Bài trước: Phải rất giàu
Tags: india