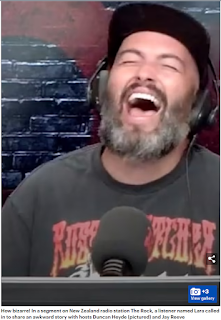 In a segment on New Zealand radio station The Rock, a listener named Lara called in to share the awkward story with hosts Duncan Heyde and Jay Reeve.
'So when my husband and I first started going out, he was a really bad snorer,' she explained.
'And what he told me was that when he lay on his back, his balls would cover his anus and create an airlock and that's why he snores,' she continued.
This ludicrous (buồn cười, lố lăng, lố bịch) suggestion caused the two hosts to burst into hysterical (quá kích động, cuồng loạn) laughter.
Jay chimed in: 'Did you at any stage while he was snoring just test it by picking them up to see if they weren't blocking his toot hole?'
Lara then offered a very surprising response.
'I cradled his balls for three years before I figured it out,' she said.
Bài trước: Thêm tùy chọn cho xe Tesla
Tags: marriage
Tags: sex