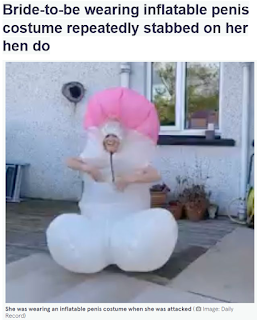 Laura Inglis was attacked by Ronald McKinnon, 27, who jumped on her at Eaglesham Pavilion and Playing Fields in East Renfrewshire.
Laura was celebrating her hen do ahead of her wedding to partner Jill Hutchinson.
Crazed McKinnon used a "sharp implement" to "repeatedly stab" 23-year-old Laura's costume.
Laura, a former star striker with 2021 Scottish Women's Football League winners Bishopton Ladies, was left so shaken by the incident she did not contact police until later that day.
McKinnon was tracked down by officers and charged with possessing a knife in public and culpable and reckless conduct by stabbing the costume.
He previously pleaded guilty to the culpable and reckless conduct charge,
Bài trước: Giờ có thể tự do hẹn hò rồi
Tags: marriage