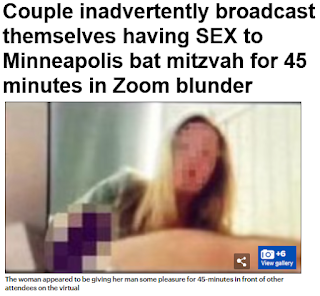 The middle aged pair were filmed fondling (vuốt ve, mơn trớn) and pleasuring one another while virtually attending the service at the Temple Beth El in Minneapolis on May 14.
And shocked onlookers said the randy (dâm dục, dâm dật) pair engaged in an extended sex session, which only ended when they finally spotted a private chat begging them to stop.
'It went on for about 45 minutes,' said one person who witnessed the couple hitting it on during the virtual religious service.
'She was walking around naked, she got dressed, she's in and out of the Zoom, he was in the bed, he whipped it out, she started going to work. Someone on the Zoom saw and called her and was like, ''WTF are you doing? You're on camera.'' She freaked out.'
'It was a Zoom for a bat mitzvah,' the person further said. 'Most people were not on camera except like, the old bubbes… who don't know how to turn off their camera, and these two people. So the boxes were pretty big and everyone could see who was on camera.'
There's no suggestion the pair are exhibitionists who deliberately broadcast themselves having sex to shock onlookers as part of a pandemic-era trend known as Zoom-bombing.
Bài trước: Khờ quá
Tags: marriage
Tags: sex