Đăng bởi lovebird21c - 12 Jun, 2022
nam người mẫu brazil lo âu vì 9 bà vợ đều muốn có con trước... :D
-----
A man who had a total of nine wives is planning to have children, and states that it is a 'first come, first served' basis as to who will be their mother after one partner left the unusual marriage. 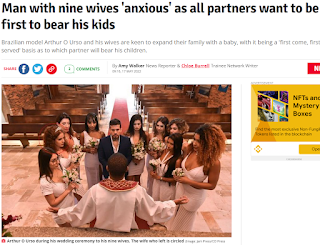 Brazilian model Arthur O Urso has said that he wants to marry two more women, despite having a sex rota in order to keep his partners satisfied (thỏa mãn).
However, after one of his partner's left, Arthur hopes to expand (mở rộng) his family (gia đình) with a baby.
Arthur and his first wife, Luana Kazaki, are swingers (đổi vợ cho nhau) who formalised the union with the other women at a Catholic church in Sao Paulo, Brazil.
However, the marriage is not legally binding as polygamy (đa thê) is illegal (bất hợp pháp) in Brazil.
Having given up the "sex rota" when it began to feel like a chore (việc vặt, việc nhàm chán), Arthur said he did not mind which of his wives - whom he practices "free love" with - conceived (có mang, thụ thai) a child.
"The cool thing about all this is that regardless of which of my wives has the baby, the child will grow up with a lot of love and affection (cảm giác ưa thích, yêu mến) from everyone," Arthur told Jam Press.
The octet have differing feelings about motherhood, according to Arthur, with some not yet keen to have children.
Others however, are thrilled about the prospect of welcoming a baby to the group.
Bài trước: Ghen tuông gì đây
Tags: marriage