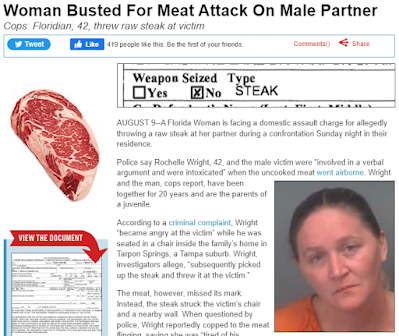 Police say Rochelle Wright, 42, and the male victim were “involved in a verbal argument and were intoxicated (say)” when the uncooked meat went airborne. Wright and the man, cops report, have been together for 20 years and are the parents of a juvenile.
According to a criminal complaint, Wright “became angry at the victim” while he was seated in a chair inside the family’s home in Tarpon Springs, a Tampa suburb. Wright, investigators allege, “subsequently picked up the steak and threw it at the victim.”
The meat, however, missed its mark. Instead, the steak struck the victim’s chair and a nearby wall. When questioned by police, Wright reportedly copped to the meat flinging, saying she was “tired of his behavior and their arguing.”
Bài trước: Ăn dày quá
Tags: marriage