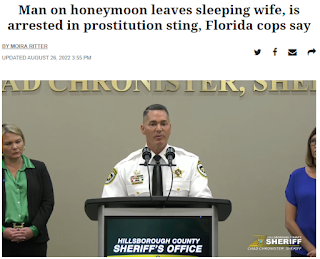 The 34-year-old newlywed (mới cưới) thought he was meeting up with someone to pay for sex, but he was instead met by an undercover cop (cảnh sát chìm) and placed under arrest immediately (ngay lập tức), officials said. The man is one of 176 arrests that the Hillsborough County Sheriff’s Office Human Trafficking Squad has made since April, Sheriff Chad Chronister said during an Aug. 25 news conference.
Most of the 176 arrested men face charges related to the solicitation (mồi chài) of prostitution (gái điếm), sometimes with minors, Chronister said. All of them made contact with deputies when they tried to purchase sex.
The Human Trafficking Squad was established on June 14, 2021, as a part of the department’s efforts to reduce (giảm) illegal (phi pháp) acts of prostitution and human trafficking (buôn lậu người), especially crimes involving children.
Bài trước: Sẽ cho nổ tung hết
Tags: marriage
Tags: sex